Rising VTube star, OniGiriEn, will do battle against CEO of Hyper RPG and seasoned Kitchen League vet, Malika, in the next Foodbeast Kitchen League matchup.

SANTA ANA, Calif., April 25, 2022 /PRNewswire/ — The thirst within the food and drink live streaming community for a communal and fun way to connect with each other has led to Foodbeast’s  Kitchen League, the unruly and much cooler cousin of every televised cooking competition. The live cooking competition turns up the heat to unprecedented levels by giving control to the viewers in activating sabotages to the Kitchen League competitors as they race to whip up never-before-seen dishes in a mad dash that’s all parts mayhem and kitchen hijinks. 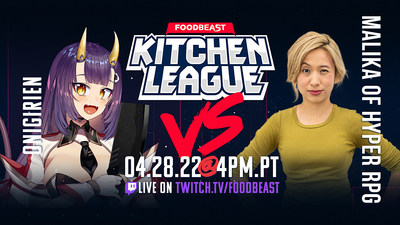 With such a one-of-a-kind setup, it’s no wonder that Kitchen League has hosted the talents of celebrities, popular streamers and major content creators like T-Pain, Olivia Culpo, Josh Elkin and Tricia Is A Birdy.

In a first, the next Kitchen League clash will have two worlds collide as ascendant VTuber sensation, OniGiriEn, takes on the tough task of battling the crafty and creative CEO of Hyper RPG, Malika. Trust the competition will be fierce and the sabotages aplenty once the two streaming sensations duke it out.

Kitchen League’s live competition format is a perfect play for this tremendous matchup,  as OniGiriEn’s expertise in AR cooking content has the potential to be a formidable challenge to Malika’s showmanship and stratospheric creativity in streaming and the kitchen.

Will OniGiriEn deliver Malika a virtual beatdown? Or will Malika one-up another foe in Kitchen League competition? Tune in on Thursday, April 28, 2022 at 4pm PST on Twitch.com/Foodbeast to see who will come out on top.

About Foodbeast:
Foodbeast is a privately operated food media company on a mission to make food as fun and interactive as possible on every platform. Over 50+ million people monthly tune in to Foodbeast’s content, with a following of over 8+ million across all social platforms. Foodbeast operates a publishing house, influencer network, creative agency and offers a line of consumer goods.

About Foodbeast Kitchen League:
Foodbeast’s Kitchen League has “reinvented the traditional cooking show by inviting viewers to help or sabotage celebrity competitors in a live showdown on Twitch.” [AdWeek].

Kitchen League is the world’s only live cooking competition. The studio cooking show is broadcast live on streaming platform Twitch with the audience invited to participate by activating sabotages or protections to spice up the battle. Every match is regulated by rules, judges and officially ranked match statistics are available on foodbeast.com/kitchenleague.

How to achieve a sophisticated yet relaxed interior

Sun May 1 , 2022
Charlie Hinckfuss, founder and director of MCM House, shares his prime suggestions on reaching the renowned house brand’s signature style. 1. Start with organic linen Commence by producing a feeling of easy structure with organic linens. Earthy-hued natural linen sofas are a good selection as they bring a relaxed take care […]